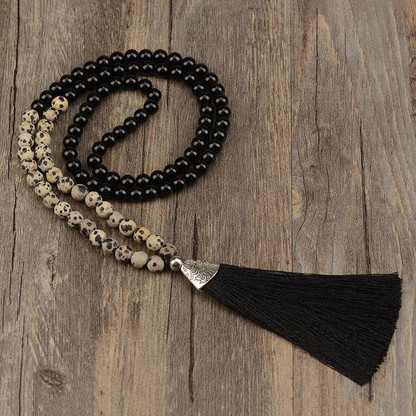 Hover over main image to zoom

The Dalmatian Stone appeals to the child within us all, fortifying the spirit and encouraging a sense of playfulness. It is particularly beneficial for those who are overly analytical, returning some of the intellectual carefulness back into the physical joy of simply being. It has a grounding energy, supportive of family and loyalty, and has a calming influence for children and animals.

Black Agate is used primarily as a meditation crystal to understand the messages of your dreams. Use it when you need to connect with your unconscious mind. It is a grounding and protective crystal. It gives a calming peace that helps those during a period of bereavement. Black Agate gives inner strength to move on and is also very helpful in keeping the peace in stressful households. This calming stone will keep one steady when faced with practical decision-making.

FOR CHANTING THE HOLY NAMES OF THE CREATOR

Mala is the Sanskrit term meaning garland or necklace.

Mala beads are used with mantra to pray or meditate. Regular use of mala prayer beads can enhance knowledge of self, intuition, prosperity, patience, health, raise energy, enhance communication and reduce stress.

Hinduism, one of the worlds oldest religions, is the origin of the mala prayer beads. Hindus who converted to Buddhism took the Mala prayer beads with them and it has since become part of many religions including the Sikh and Muslin religions.

Nine is the sacred number and common denominator in mala prayer beads. The most common malas are 27, 54 or 108 beads in length. The Hindu sacred number of 108, predating Buddhism, is the classical number of the Hindu names assigned to a Hindu Deity or God

Regardless of the number of beads of the mala it is important that if a mala is used to count mantras with devotion. Japa or chanting into the sound current creates Tapa the spiritual heat. It becomes Dharma, which leads to the path of God. Mala beads can be used in any religion or spiritual tradition.

One mantra- one bead. Mantras are often repeated hundreds or thousands of times at one sitting. Mantras are sacred sounds that reflect the spiritual teaching or religion they represent. The person chanting or the instructor giving the meditation according to tradition or spiritual intuition decides the Name or Names of God chanted.

Almost all malas have a large bead at the end called the Guru Bead, Seva Mother or Mother Bead. It validates the end of one round in the prayer cycle. One prayer, chant, affirmation - one bead. On a full sized mala the guru bead is the 109th bead. The small wrist mala usually has 27 or 21 beads plus Guru Bead. The Guru bead is a reminder of the bond between teacher and student. Power beads can also be malas. The use of semi-precious stones in malas when used in your sacred space have healing properties.

When the beads are passed over the ring finger calmness is attained. When using the mala it is important that you turn around at the Guru Bead and go the other direction. Never cross the Guru Bead.

Your fingers contain nadis (vital energy centers) that directly connect to your brain. Counting should always begin with the bead next to the Guru Bead. Each time the mantra is repeated, the fingers move to the next bead. One bead is counted for each recitation of the mantra. Do not cross the Guru Bead with the mantra - turn the mala 180 degrees and begin chanting. When the beads are passed over the ring finger calmness is attained.

Japa is a form of mantra (repetition of Gods name) that will eat up defeat and creates Tapa (heat which burns up karma) and Sanjam the technology---how to do it.

Hindu tradition holds that the correct way to use a mala is with the right hand, with the thumb flicking one bead to the next, and with the mala wrapped over the middle finger. Generally do not use the index finger as in ancient times it was thought use of the index finger was bad mannered and also facilitates karma.

Buddhists generally hold the mala in the left hand. The first bead is held between the index finger and thumb, and with each count the thumb pulls another bead in place over the index finger. After completing a full circuit of the mala, the practitioner flips the mala around 180 degrees. Continuing over the guru bead is like crossing your teacher.

In many Tibetan malas there are divider beads of a different color, spaced equally along the mala's length.

The tassel found at the end of many mala beads represent enlightenment.

As the mala found it way to other religions this formula changed according to the region, religion or spiritual tradition.

You can wear malas around the neck or wrist or keep them in a pouch that is frequently made of silk or cotton or other natural materials.

Mantras are often repeated hundreds or even thousands of times. The mala is used so that one can think about the meaning of the mantra as it is chanted rather than thinking about counting the repetitions. In some cultures specific mantras and or beads are used to create specific effects.

Malas are made from a wide variety of materials including but not limited to wood, including sandalwood, seed including lotus seed, gemstones, crystals, steel, gold, silver, plastic, glass and animal bones are frequently used in making mala beads. Semi-precious healing stone mala beads have been used for physical healing and healing of situations since ancient times. Malas created from various materials are beneficial as an aid in healing or developing qualities and situations that are very desirable when used with a complimentary mantra.

This product hasn't received any reviews yet. Be the first to review this product!

All prices are in USD. © 2020 Guardian Angels by Lisa Lopez . Sitemap | Shopping Cart Software by BigCommerce